Unwrapping our prints when they come back from the printers in Como, Italy is very exciting. This was one of the first prints we unwrapped, designed around one of our Muses for this collection; Ann-May Wong and printed on beautiful silk satin. Anna-May Wong was the very first Chinese-American movie star. The print was designed to emulate a black and white analogue film strip flickering against the background of a luxurious wallpaper in glamorous old Picture House.

Wong rose to fame with her role in 1924’s “Thief of Bagdad” with Douglas Fairbanks, but her career was plagued by offers to play negative stereotypes of Chinese females and was limited by American anti-miscegenation laws that prevented her from sharing an on-screen kiss with a person of another race. She appeared in “Daughter of the Dragon,” “Daughter of Shanghai,” and, with Marlene Dietrich, in Josef von Sternberg’s “Shanghai Express.”

Wong grew up in a poor neighborhood in downtown Los Angeles. She has a star on the Hollywood Walk of Fame and is depicted in the the Four Ladies of Hollywood statues at La Brea and Sunset along with Dolores del Río, Dorothy Dandridge and Mae West.

We loved her look and whilst watching “A Thief of Bagdad” we decided she was a woman of  style, beauty and determination a perfect muse for Modern Love 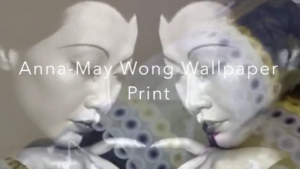